Our 5D Ultrasonic Cavitation treatment helps to breakdown fat cells without the need for surgery.

Our 5D Ultrasonic Cavitation treatment helps to breakdown fat cells without the need for surgery.

Cavitation treatment is effective on those located in the most difficult and stubborn areas. Unlike other fat removal techniques, this advance treatment is a non-invasive and non-surgical proven European fat removal treatment for fat emulsification and cellulite reduction.

If you’re a man or woman with stubborn fat and bulges on your stomach that just don’t seem to go away even with dieting or exercise, and you don’t want to undergo tummy tuck or liposuction surgeries, then this body contouring and fat reduction technique is for you. Sudden weight loss, ageing, pregnancy or simply a lack of regular exercise can cause such imperfections on your stomach. 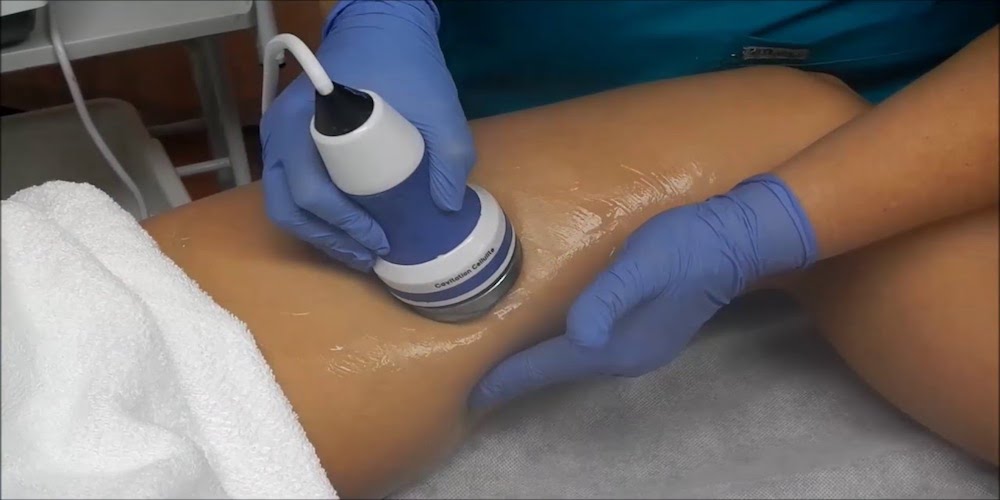 The treatment is designed to contour your body, pain free with no downtime required.

Results are often visible right away – sometimes, you can see a difference immediately after your first treatment.

You can reshape your body, banish cellulite, and feel good in the skin you’re in.

In order to achieve optimum results from your Ultrasonic Cavitation treatment, we strongly recommend the following:

One Week Prior To Your Treatment Session:

24 Hours Prior To Your Treatment Session

In order to achieve optimum results from your Ultrasonic Cavitation treatment, we strongly recommend the following:

If you have any of the following health conditions you can NOT have Ultrasonic Cavitation:

If you have any of the following health conditions, you will need a letter of consent from your GP or medical practitioner:

Ready to book a treatment?

Cavitation is an advance technology that is relativity new that offers a reduction in fat cells. Cavitation treatments are non-surgical, non-invasive fat removal procedure that offer superior results. Ultrasonic Cavitation or commonly called Cavitation for short, consist of low-level frequencies that transmit into the skin and cause a biological phenomenon that consist of the formation of bubbles in between the fat cells. This breaks down the fat cells and the body later removes them through the lymphatic system. There is no surgery, no anaesthesia, no needles, there is no hospital stay, no time off from work and no recovery time. Clients see immediate results and will continue to see results in the reduction of fat up to 72 hours following the treatment.

Cavitation treatment is very effective in the removal and reduction of cellulite. As the sound waves penetrate the fat layer they destroy and kill the fat cells, resulting in a smother and reduction of cellulite. Cavitation treatment is the perfect treatment for people who want to contour their body and regain their confidence, figure – and its very relaxing. Most clients see an immediate change in their appearance after the first session, with optimum results after 6 to 12 sessions.

Most of our clients experience 2-5 cm of circumference reduction after a single initial session. This improves with each scheduled visit to our clinic. However a course of Cavitation & Radio Frequency treatment is recommended to help clients reduce inches and reshape their bodes. It is recommend to have 1 session every 72 hours, this ensure the cells do not reabsorb the fat, and that you gain optimal results from treatment. Although this does not mean you will gain the fat back after your treatment finishes.

Ultrasonic Cavitation or commonly called Cavitation for short, consist of low-level frequencies that transmit into the skin and cause a biological phenomenon that consist of the formation of bubbles in between the fat cells. This creates a shock wave that selectively damage the membranes of the adipocytes (fat cells). After the breakdown of adipose tissue (fat cell membrane), the liquid fat is realised into the interstitial fluid between the cells, where it is enzymatically metabolised to glycerol and free fatty acids.

Water-soluble glycerol travels into the circulatory system and is used for new energy generation. The insoluble free fatty acids enter the liver where they are decomposed like any other simple fatty acid and excreted as waste (urine). It is scientifically proven that after a cavitation session, excess fat liquid are drained from that body via the urinary system and no damage is caused to the surrounding organs or tissues. Clients can see an instant result from treatment, with measurements and photos taken before and straight after treatment.

There will also be an increase production of diuresis (the production of urine by the kidneys) in the hours following the treatment session, and continues into the next day as the body metabolises the excess liquid caused by the fat cells. Some clients do have an urge to use the toilet straight after treatment, this is normal and is the result of the fat cells leaving the body. As the urine becomes more acidity, the smell and colour of the urine may be observed right after the treatment session, this is very apparent for those clients that have a higher percentage of body fat. Cavitation is very effective.

Once the fat has been released by the cells during the cavitation treatment it is dispersed into the fluid between the cells which is later transported to the liver. The free fat cells go into the liver and later leave the body through your urine - yes you pee away the fat cells. Both the cavitation treatment and natural removal of fat cells are processed by the body’s natural mechanisms and converted to bile. This is excreted from the body naturally via the urine and stools.

RT Aesthetics will design a treatment plan based around your own goals and exceptions, they will then monitor your results and progress throughout. RT Aesthetics take body measurements and photos at every appointment, this is to ensure your body transformation is monitored and to show off them amazing photos at the end!

Benefits of cavitation include the following:
- Helps reduce and removes cellulite
- Allows you to contour your body
- Pain free with no down time
- Target specific areas
- Quick and effective results
- See results after just one sessions

Due to the nature or non-surgical and non-invasive treatments that we offer, we cannot guarantee results. Results will vary from person to person. Factors such as lifestyle, medical history and age can effect your results and the longevity of results.

From 360 fat freezing to the 4D HIFU facelift treatment, I really have had many treatments at RT Aesthetics. Each treatment has helped my self-confidence and made me feel great. I first started of with the face-to-face consultation appointment to have my areas looked at to make sure I was suitable for the treatment. At...

Amazing clinic and great staff. I really cannot fault the care and support I had throughout my treatment. They are honest from the beginning and don’t force you into anything. The pricing is very good and in my opinion they don’t charge enough for the treatments. I have since signed up as a member to benefit from monthly treatments.

On the day I received treatment Ryan was so attentive and made sure I was comfortable from the outset. I had the cryolypolosis (fat freezing) treatment on my stomach and love handles and have seen such amazing results after only two weeks, even though as standard it is supposed to take up to six weeks for results to show.

I’ve had 2 treatments and both have been amazing. I had the 360 Fat Freezing treatment on my legs followed by the shockwave treatment. The fat freeze helped get rid of all the stubborn fat and the shockwave was great at breaking down my cellulite. Very knowledgeable, honest and caring clinic.

I had the 360 fat freezing treatment in September and since had 1 more treatment on my love handles. The treatment has worked well and I’ve been more then happy with my results (better than I imagined). The clinic is extremely caring and attentive and I’ve really enjoyed my experience

After learning lots about fat freezing during the consultation and reading lots online I booked in for treatment. I have seen such a big difference around my love handles and stomach area. The aftercare was great, you get a diet plan, email, follow up appointments and if I needed anything they were there for me.

I could not be happier with RT Aesthetics. Ryan made me feel at ease from the minute we met. I suffer really badly with anxiety and body dysmorphia so this was a very big deal for me. The attention he pays to detail and his knowledge of procedures is out of this world, he’s a very intelligent and talented individual. There is literally nothing to worry about!

Very professional service throughout my consultation and first 360 fat freezing treatment. I just sat and watched Netflix with a cup of tea and a glass of water. They even have iPads and music depending on what you’d like todo but I enjoyed watching Netflix. Results so far have been great and can only get better. All together it’s been a lovely experience

I’ve been to a few clinics this year and I had the HIFU somewhere else and it didn’t work so I was worried to try again with RT Aesthetics. I shouldn’t of been! The results I’ve had from the full face and neck 4D HIFU has made such a big difference. My jowls have tightened, my skin looks better and the care throughout was great.

A huge thanks to Ryan for today at RT Aesthetics for my fat freezing procedure. I was a bit nervous but more because I needed to get down to my underwear in front of you. You made me feel really comfortable and at ease. Everything was fully explained to me and I’am excited for the results.